Baby signing – what is it? 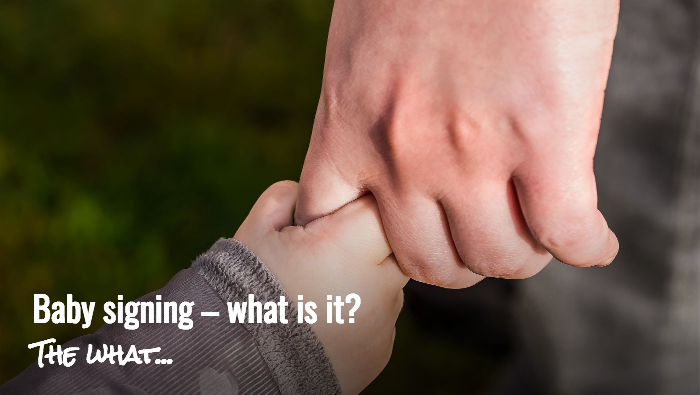 Baby signing is a simple way to communicate with pre-verbal babies and toddlers before they can speak.

On average, from six months of age, babies have both the physical and mental ability to learn basic signs using their hands to express their needs and wants.  From this age, babies can learn to wave hello and goodbye and to blow kisses. They learn to shake their head to say NO and nod for YES. Baby signing is really just an extension of this – using a simple gesture with one or two hands, to communicate some meaning.

Is it hard to teach baby signing?

Baby signing is not hard to learn, and won’t deter your baby from speaking. Just as most babies crawl before they walk, signing before they can talk is a natural progression in their development.

Using our hands in communication is a natural thing we humans do, and baby signing is an extension of this. Babies learn to point to items of interest, raise their arms to ask to be picked up, wave hello/goodbye and clap their hands to express delight – these are all examples of using their hands to communicate. Babies also quite often create their own “signs” without having even been exposed to baby signing. While not an actual sign, at 12 months old, our youngest made a sing-song noise to refer to the swing – it is the same tune that I always say “swing-swing” when pushing her on the swing.

All babies have their own developmental timelines, but on average, by introducing baby signing around six months, babies can be signing back by nine months old. Older babies generally learn more quickly and usually start signing back even quicker.

It really is amazing how much babies actually take in of the world around them. The first three years of a child’s life is when the billions of neurons form connections (synapses) through their experiences – sights, sounds, touches etc.  These synapses form the basis of their ongoing intellectual development. By using baby signing, parents can increase these connections and encourage early learning.

Baby signing is a fun way to interact with your baby, and can reduce much of the frustration of those early years by giving your baby the tools to communicate. You can incorporate signing with books and singing – signs can be incorporated into many popular nursery rhymes. And remember, babies crawl before they walk, so why not teach them to sign before they talk!